Motorcycle Trail Braking On The Street

On the track, racers are either on the throttle or on the brakes – no free wheeling – this wastes time. Trail braking is a technique which racers use to slow the bike as quickly as possible from one speed (on the straight) to another (corner apex speed).

In applying this technique, a racer will approach a turn and at their braking marker apply full braking force, normally with the bike being upright. As they begin to turn in, they reduce brake pressure, easing off the brakes, decreasing or trailing the brake lever force as the bike lean angle increases until they get to the apex when they release the brake and apply the throttle.

Most people understand that the level of grip reduces as you lean the bike over and that maximum braking force is available when the bike is nearest to vertical.

To understand trail braking, the simplest way is to use the dollar analogy.

The more spent on one, the less you have to spend on the other, and there’s a big penalty for overspending!

Normally only the front brake is used for trail braking as the rear brake contributes little braking power on most bikes, has less feel and is normally reserved for mid corner fine adjustments or to stabilise the bike.

To truly comprehend the dynamics of trail braking, ignoring any aerodynamic effects, some understanding of tyres and grip is beneficial, with the amount of grip from the tyres depending on various factors.

Also as the brake is applied, torque is transferred through the wheel to the contact patch, which creates a horizontal force at the road surface. The road pushes back on the tyre and equally the tyre pushes forward on the surface. You can thank Newton for this mechanical grip; as for each force there is an equal and opposing force.

Also to consider is the significant grip increase experienced as the front tyre contact patch pressure multiplies due to the load transfer when braking. This grip effect decreasing as the lean angle increases and the load transfers from the front to the rear tyre.

As the brakes are applied and the weight shifts forward, the forks are also compressed. This compression of the forks alters the motorcycles steering geometry, reducing the rake and trail. This decreases stability but increases manoeuvrability in a fashion that makes the motorcycle lean and change direction at a higher roll rate.

Simply speaking, trail braking is continuing to brake after initiating a turn.

So now we understand the dynamics of trail braking, should we trail brake on the road?

A large proportion of these are caused by survival reactions, such as panic braking on a corner.

A survival reaction is primarily caused by the rider’s lack of understanding of their own limit and the limit of their machine.

So if you are riding around a corner and you spot some gravel or perhaps a 4WD cutting the corner what would you do?

So lets get real and get trained.

Former MotoGP Engineer & International Racer Mark McVeigh is the Founder and CEO of motoDNA, improving motorcycle rider's performance and safety around the world.
Previous
Next

Developed from thousands of riders at the motoDNA Motorcycle Training, our algorithms measure, grade and train motorcycle riders. 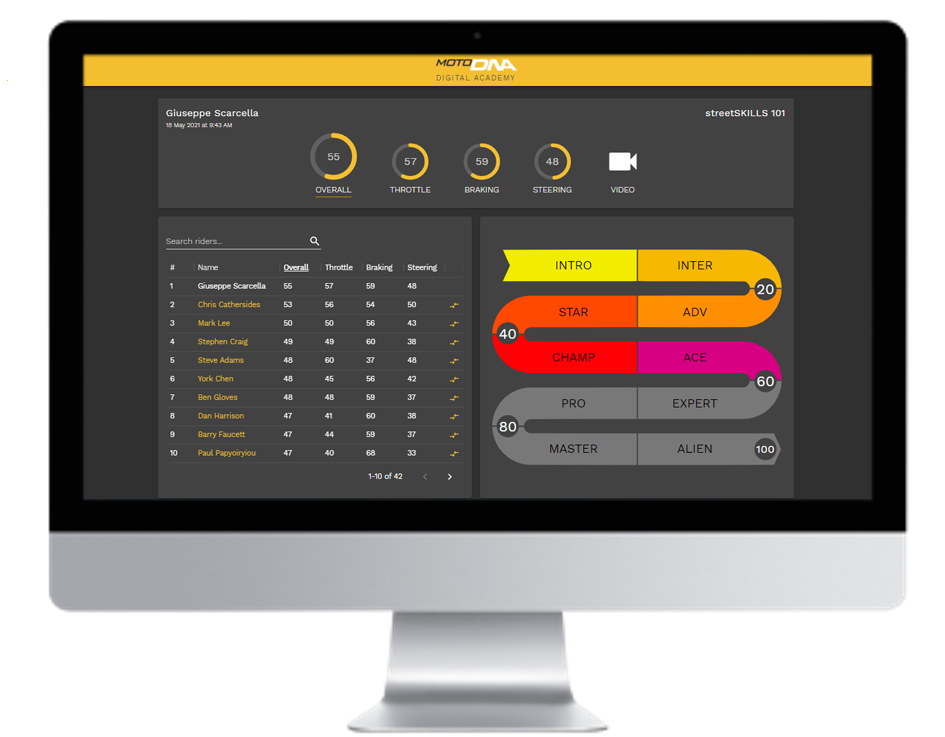